Today, fifty years ago – April 11, 1963 – Pope John XXIII released his encyclical Pacem in Terris, in which the term "subsidiarity" was used (in its modern meaning) for the first time.

A text copy can be found here; see section 140 for the term. But the idea is older, and so is the original term - and if you want further details, please check out the book Subsidiarity, available here.

Note, however, that our own special celebration occurs annually on March 2, which is the "birthday" of Subsidiarity, the day in 2000 when our system went live.
Posted by Pete Floriani at 10:52 AM No comments:

March 2 – the Feast Day of Subsidiarity!

Yes, happy feast day. No; I have no "dispensation" for "feast days" during Lent; it is not quite that sort of feast. Rather, it is more of a "commemoration" yet some sort of feasting is appropriate. it may seem a little odd to designate a particular day for an idea, but why not? It is a significant idea, and a practical one also. Another time I may try to examine that point more fully, but for now it is deferred.

The one thing you may be wonder is this: Why March 2?

That's very easy to explain. It was on March 2 of 2000 that my friends the Field Techs installed the HBG headend and we went live, doing ad insertion and transporting spots over the satellite. And each of the following years we had cake on this day to mark the date on which our software system for local ad insertion for cable TV went live - the system which managed some 200,000 spots over five and a half years for a Certain Large Cable TV company in the USA... and that system used Subsidiarity to manage the file transport of those commercials. It's long gone, but even that Certain Large Cable TV company still talks about things like the "Pump List" even though they no longer have a Pump - the program which was at the heart of file transport. And I hear they still wish they had a monitoring tool as good as WATCHER... 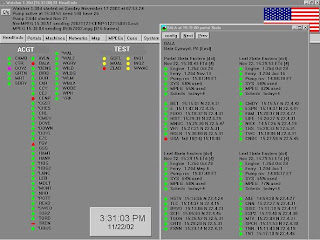 Oh yes, as remarkable as that must sound to you, whether you are a student of Catholic Social Teachings, or Social Sciences in general, or of Cable Television, or Computer Science and Software Development... We used Subsidiarity to manage our file transport. Why? Because (as Chesterton put it in his Heretics CW1:46) we "reverted to the doctrinal methods of the thirteenth century, inspired by the general hope of getting something done."

And we sure did "get something done": as I said, some 200,000 commercials were transported to some 80 headends over those 5.5 years. No dream, no fantasy: real-world, high-tech stuff. So, if you want more details, you ought to order a copy of the book where all this is explained.

P.S. Just a year or two ago I learned another reason why March 2 is an almost incredibly suitable date to pick, a reason linked to some other historical event, but I will reserve that for another time.

P.P.S. I must also express my thanks to my boss and my colleagues - Joe, Joe, and Diane - and the great people in Traffic, in Field Services, and especially the Control Room - who helped make it all happen. It was a grand thing, and even if that system is gone, our work continues to enlighten and inform others. It's a sort of meta-commercial of the best kind.
Posted by Pete Floriani at 7:40 AM No comments:

Email ThisBlogThis!Share to TwitterShare to FacebookShare to Pinterest
Newer Posts Older Posts Home
Subscribe to: Posts (Atom)
The purpose of this blogg is to enable questions and discussion about the concept and implementation of Subsidiarity, in particular as it is presented and investigated in the new book, entitled Subsidiarity.

Visit here to order the book, or here for more information.